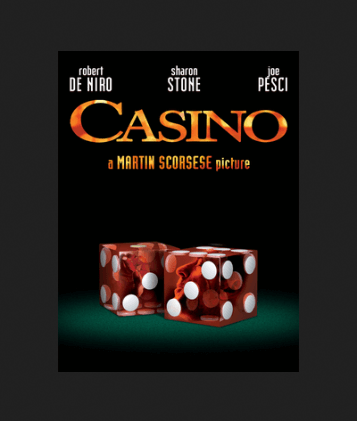 Casino is a 1995 film starring Robert De Niro, Sharon Stone and Joe Pesci. The film was directed by the legendary Martin Scorsese and was a critical and commercial success, netting Sharon Stone a best actress Golden Globe. The film was produced by Legend Enterprises and distributed by Universal pictures.

Casino is Based on A True Story

The film is loosely based on the true life events of the book. Nicholas Pileggi was inspired when he read an account in the newspaper regarding a Casino figure, Frank Rosenthal and his wife Geri McGee. This also revealed the story of the legendary Stardust Hotel and Casino that has some shade relationships with the Teamsters and the mismanagement of their pension funds.

The film earned Sharon Stone an academy award nomination for Best Actress in a Leading Role for her portrayal of Ginger McKenna, the character based on the real life wife of Frank Rosenthal, Geri McGee. She eventually won the Best Performance By An Actress in a Motion Picture award at the Golden Globes. Martin Scorsese was nominated for Best Director at the same Golden Globes ceremony but did not win. The film also features memorable performances by the legendary comedian Don Rickles who plays Billy Sherbet, based on the real life person, Murray Ehrenberg. James Woods plays a conman turned pimp named Lester Diamond who was inspired Lenny Marmor. Kevin Pollak plays Phillip Green, inspired by Alan Glick, who headed the argent corporation that ran the Stardust Casino, but was secretly skimming off profits for the Mobsters.

The Plot of Casino

The film is about a sports handicapper, working for the mob, Sam Rothstein, played by Robert De Niro. He is sent to Las Vegas because the Chicago Mob wants him to run the Tangiers Casino, secretly funded by the local Teamsters Union through the dealings of Philip Green, based on the real life Alan Glick. Soon Sam has the Tangiers Casino running at double the profits, doubling the amount the local mobsters are skimming off the top of the casino’s profits.

The Chicago mobsters decide to send a friend of Sam, Nicky Santoro, played by Joe Pesci and based on real life mob enforcer Anthony Spilotro, to offer protection and extra muscle for Sam’s operation. Unfortunately Nicky is loose cannon with a very short temper and soon he is barred from almost all the local casinos. Undeterred though, Nicky quickly puts a crew together and starts ordering shake downs and burglaries. Things are complicated when Sam falls in love with a local hustler, Ginger McKenna, played by Sharon Stone. Her self absorbed actions and her love for her former partner Lester Diamond, played by James Woods, places a lot of stress on Sam and leads to a dramatic climax for the film.

Casino is the eighth film that Robert De Niro has worked with Martin Scorsese and the eight success for the team with their previous collaborations ,Mean Streets, New York New York, Taxi Driver Raging Bull ,The King of Comedy, Cape Fear and Goodfellas all receiving critical and commercial acclaim. It is also the second film based on the writing of Nicholas Pileggi, with him and Scorsese previously working on Goodfellas together. The film is based on Nicholas’s nonfiction work titled Casino.